With $467,000 in grants from FRAXA Research Foundation, Dr. Tom Jongens, University of Pennsylvania, and his collaborators have used the fruit fly model of Fragile X syndrome to pinpoint and test potential treatments for Fragile X, including metformin, pioglitazone, and lithium. 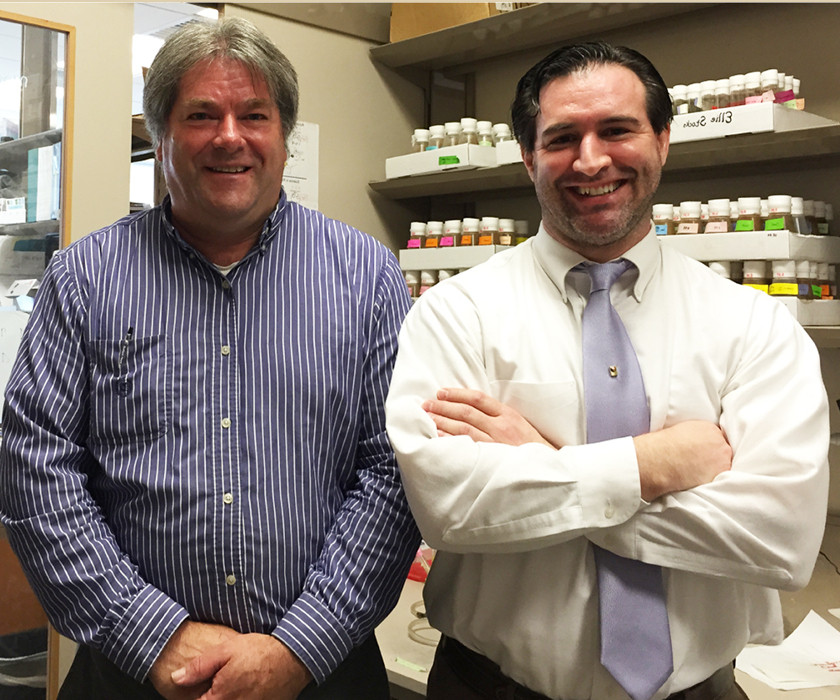 This team has found an insulin-like protein in the fly brain that is overexpressed in the Fragile X mutant fly, leading to increased activity of the insulin signaling pathway. Furthermore, they found that certain behavioral patterns in the Fragile X flies can be rescued by expressing the FX gene just in insulin producing neurons in the fly brain. In the mutant, there are other changes in the signaling pathways, including a decrease in cAMP and elevation in PI3K, mTOR, Akt and ERK activity. They now propose to study 2 medicines used for diabetes: pioglitazone (increases cAMP and decreases Akt and ERK) and metformin (inhibits mTOR), in flies and mice to validate the potential efficacy of these novel therapeutics for Fragile X.

We have developed a Drosophila Fragile X model, based on loss of function mutations in the Drosophila homologue of FMR1, called dfmr1. Using this model, we and others have identified several phenotypes that bear similarity to symptoms displayed by Fragile X patients. These include neuro-anatomical defects, circadian defects, reduced social interaction, and cognitive deficits. The overall goal of our laboratory is to use this model to understand how the loss of dfmr1 gene function leads to the phenotypes observed in the fly model and to identify approaches to ameliorate them.

With funds provided by FRAXA, we will explore two approaches to treat phenotypes displayed by the fly Fragile X model. One pathway we are focusing on is cAMP regulation, as the pathway that produces this important small signaling molecule has been shown to be down-regulated in Fragile X patients and the fly and mouse models of Fragile X. We are therefore exploring the effects of increasing cAMP production on fly model phenotypes. Also, following on the finding of Kim Huber’s lab that have shown that signaling by another neuronal receptor, the muscarinic acetylcholine receptor, is upregulated in absence of FMR1 activity, we will explore the effects of down-regulating the activity of this receptor on the phenotypes displayed by our fly model. This work is being done in collaboration with Sean McBride.

Not many medications exist to help Fragile X patients. Now, in a fruit fly model of the disease, researchers from the University of Pennsylvania School of Medicine and their colleagues have shown that it is possible to reverse some of the symptoms of the disorder using drugs that dampen specific neuronal overactivity. Their findings appear in the March 3, 2005 issue of Neuron.

Senior author Thomas A. Jongens, PhD, Associate Professor of Genetics at Penn, and colleagues from Albert Einstein College of Medicine and Drexel University College of Medicine, as well as other labs, have developed and characterized a Drosophila fly model for Fragile X. This model is based on mutants that lack the dfmr1 gene, which encodes a protein similar to human FMR1 protein. “Interestingly, work by my lab and others have found that the dfmr1 mutants display many physical and behavioral characteristics similar to symptoms displayed by Fragile X patients,” says Jongens. These include structural defects in certain neurons, enlarged testes, failure to maintain proper day/night activity patterns; attention deficits and hyperactivity, and defects in behavior-dependent learning and memory.

“Our thinking was that since so many of the behavioral and physical phenotypes in the fly model were similar to symptoms observed in Fragile X patients and a mouse Fragile X model, FMR1 and dfmr1 must be regulating similar biological processes in human, mice, and flies,” states Jongens.

A mouse model of Fragile X also shows symptoms similar to those of Fragile X patients. Studies outside of Penn using the mouse model have demonstrated that Fragile X patients have a tendency to break down synaptic connections (sites used for neuron to neuron communication) more readily than the general population. This breakdown is due to an increased activity in the metabotropic glutamate receptor (mGluR), which is located on the surface of neurons, including in the hippocampus — the memory and learning center in the brain. In turn, this increased activity compromises neurotransmission for memory-associated functions.

Jongens and colleagues surmised that mGluR overactivity may be at the root of many of the Fragile X symptoms. Using such drugs as lithium chloride and others, known as antagonists, that block mGluR’s activity, the team tested to see if the drugs could rescue any of the observed behavioral and memory defects observed in the fly model.

“What we found was very striking,” says Jongens. They found that the drug treatments restored memory-dependent courtship behavior in mutant flies and reversed some of the neuronal structural defects. The group used lithium because it is known to have activities analogous to blocking mGluR-receptor activity, and it is already an FDA-approved drug used to treat other ailments in humans such as bipolar disorder.

“The big take-home message from our work is that maintaining proper regulation of mGluR signaling is a conserved function of the dFMR1 and FMRP proteins and that loss of dfmr1 function in flies leads to at least a subset of the cognitive and behavioral defects observed in the fly model,” says Jongens. “These results provide a potential route by which symptoms of Fragile X patients may be ameliorated.”

First authors on the paper are Sean M.J. McBride, Albert Einstein College of Medicine, and Catherine H. Choi, Drexel University College of Medicine. This work was funded by the National Institutes of Health and FRAXA Research Foundation.