With $375,000 in grants from the FRAXA Research Foundation, Dr. David Nelson developed an impressive array of advanced mouse models of Fragile X, at Baylor College of Medicine. This resource has been essential for a broad, rapid distribution of Fragile X and related gene mouse models and has increased the pace of Fragile X research.

This resource is no longer active. Please contact The Jackson Laboratory for mouse models. 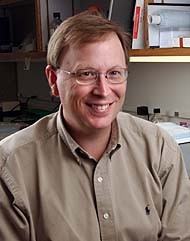 This AALAC certified Transgenic Mouse Facility sent more than 70 shipments to academic facilities in the United States, Canada, Europe, China and Chile. Many of these mouse strains are now available at the Jackson Laboratory.

Fmr1 KO – This is the original Fmr1 knockout animal that carries an insertion in exon 5 (Bakker et al., 1994). It is a protein null, although Fmr1 mRNA is still present (Yan et al., 2004). Mice have been backcrossed over 20 generations to the C57/Bl6 strain.

Fmr1 KO2 – This is a new null allele at Fmr1 generated by deletion of the promoter and first exon of Fmr1 (Mientjes et al., 2006). It is both protein and mRNA null. This mutation is the same as is produced by Cre-mediated excision of the loxP sites present in the Fmr1 cKO described below.

Fmr1 cON (conditional restoration) – This strain carries a neomycin selection cassette that is flanked by loxP sites in the first intron of Fmr1(Mientjes et al., 2006). We estimate less than 10% of normal levels of FMRP are present in brains of these animals.

FMR1 CGG90YAC transgenics – Additional lines carrying a human FMR1 gene with expanded CGG repeats as a YAC transgene were developed by the Nelson group for study of CGG repeat instability. These are also models for FXTAS.

Fxr2 KO – Fxr2 is an autosomal paralog of Fmr1. The Oostra and Nelson groups developed a knockout mouse for this gene by insertion of a selection cassette into exon 7, eliminating protein expression (Bontekoe et al., 2002). These animals have been backcrossed into C57/Bl6 for more than 20 generations.

Fxr1 KO – Fxr1 is an autosomal paralog of Fmr1.

Fxr1 cKO (conditional knockout) – This mouse carries loxP sites that were introduced by homologous recombination to flank the promoter and first exon of Fxr1. Cre-mediated recombination between the loxP sites will eliminate Fxr1 expression, producing an Fxr1 KO deletion.

Fxr1 cON (conditional restoration) – This strain carries a neomycin selection cassette that is flanked by loxP sites in the first intron of Fxr1. Due to the presence of an oppositely oriented transcribed gene in intron 1, expression of Fxr1 is greatly reduced, resulting in a hypomorphic mutation. We estimate less than 10% of normal levels of FMRP are present in tissues of these animals.

The Nelson group has made use of combinations of Fmr1 and Fxr2 mutations to elicit additional phenotypes such as hyperactivity and circadian rhythm anomalies (Spencer et al., 2006; Zhang et al., 2008). The double KO animals are difficult to maintain as a line, and need to be produced from a double heterozygote cross.

Cre expression lines – Many transgenic animals have been developed that express Cre recombinase in specific tissues or upon induction. The Nelson group has imported several of these, and has demonstrated Purkinje cell specific ablation of Fmr1 and Fxr1 for phenotypic studies.