With $70,000 in funding from FRAXA Research Foundation from 2004-2005, Drs. Thomas Tuschl and Neil Renwick and their team at Rockefeller University researched how FMRP interacts with miRNA in order to determine more effective treatment targets for Fragile X syndrome. 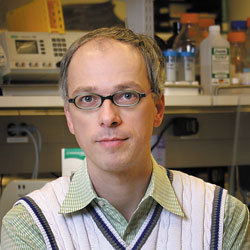 The Role of MicroRNAs in the Pathogenesis of Fragile X

More than ten years have passed since scientists discovered that Fragile X syndrome is caused by the absence of a single protein, FMRP. Studies have demonstrated that FMRP regulates the translation of mRNAs into proteins by recognizing and binding to numerous mRNAs. This process is crucial for the function of neurons. However, it is not well understood how FMRP recognizes a particular mRNA and how it regulates the mRNA’s translation into a protein. Understanding this will help facilitate the development of therapeutic treatments.

Recent discoveries in the new field of RNA interference (RNAi) have lent insight into how FMRP recognizes its target mRNAs. Like FMRP, the RNAi machinery regulates the translation of numerous mRNAs. The RNAi machinery recognizes its target mRNAs through tiny non coding RNAs termed microRNAs (miRNAs). miRNAs are found in all animals, so they must have a fundamental role in regulating gene expression. The recent finding that FMRP interacts with the RNAi machinery suggests that FMRP functions with this machinery to regulate gene expression. FMRP and miRNAs most likely recognize and regulate a common set of mRNA targets in the brain. Mis-regulation of these target mRNAs in Fragile X patients probably causes the disease.

To provide a starting point for the biochemical and cell-based analysis of FMRP-miRNA interactions, we have cloned miRNAs from different human, mouse and rat brain regions. We also cloned miRNAs from cell lines that are used as model systems in neurological studies. Our experiments will focus on elucidating the mechanism of translational regulation of mRNAs that are believed to be targeted by miRNAs as well as FMRP as suggested by previous experimental studies as well as computational analysis. To determine if FMRP directly contributes to miRNA expression, we have compared miRNA profiles in brains of normal mice and mice deficient in FMRP. We did not identify a difference in miRNA expression, ruling out FMRP as a factor involved in miRNA expression or stability.

In order to directly isolate the targets of miRNAs, we have established neuronal cell lines that stably express epitope tagged Ago1 or Ago2 proteins. Ago proteins bind miRNAs and mediate target recognition as well as target cleavage or translational repression. We will also establish a tagged FMRP cell line. We will use these cell lines to directly purify Ago and FMRP-associated mRNAs. These experiments will provide an independent approach for identification of FMRP and miRNA co-regulated mRNAs. Identified mRNAs will be further validated using a cell-based assay and a mouse model of fragile-X syndrome.