With a $70,000 grant from FRAXA Research Foundation from 1999-2001, Dr. Robert Darnell and his team at Rockefeller University made significant contributions towards understanding how FMRP functions and how the brain is affected without it. Results published. 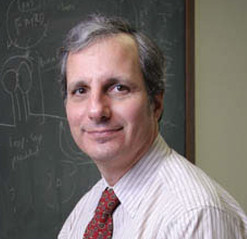 Researchers now have a much clearer understanding of how mutations in a single gene can produce the complex cognitive deficits characteristic of Fragile X syndrome, the most common inherited form of intellectual disability. As the majority of patients with Fragile X syndrome also display autism-like symptoms, the findings offer hope for treating both conditions.

A report in the July 22nd issue of the journal Cell, published by Cell Press, defines a set of messenger RNA (mRNA) molecules that the Fragile X protein FMRP binds in the brains of mice. Many of these mRNAs encode proteins that function at neurons’ connection points. When properly bound, FMRP prevents the translation of these mRNAs into proteins until the time is right.

“By understanding for the first time the direct targets of FMRP and its actions, we open up a whole world of potential avenues for therapies designed to make kids with Fragile X or autism better,” said Robert Darnell, a Howard Hughes Medical Institute investigator at The Rockefeller University.

“The power comes from taking two diseases with similar symptoms and looking at what is in common,” added Jennifer Darnell, also at The Rockefeller University. Of the almost 850 identified targets of FMRP, she explained, it is likely only a much smaller subset has a real impact on health or disease.

The Darnell team’s breakthrough uses a technique they developed a few years ago based on a “biochemical trick”. They use ultraviolet light to solidify the bonds between a protein, in this case FMRP, and the mRNAs it binds. Those protein-mRNA complexes could then be isolated and sequenced to reveal a “beautiful map” of the mRNA transcripts and precisely where they are bound to FMRP.

The experiments reveal that FMRP specifically binds to the protein-coding portions of those brain mRNAs. Jennifer Darnell said that distribution is unlike what they’ve seen before and looked much like the distribution of ribosomes, the cellular components that assemble proteins.

Further experiments suggest that FMRP acts as a “brake,” reversibly stalling ribosomes after they bind mRNA. Robert Darnell likened FMRP to the nozzle at the end of a hose. It allows the mRNA transcripts to be loaded with ribosomes in the locations where they will be needed, and when the time is right, bursts of translation (protein synthesis) can occur. That sort of tight control is likely to be critical for the formation and plasticity of neural connections, the cellular foundation for learning and memory.

Their basic scientific discoveries suggest two different overall strategies for treating Fragile X syndrome: by lowering the activity of particular proteins normally kept under wraps by FMRP or by replacing FMRP’s ability to stall ribosomes. Notably, the Darnells say the latter is exactly what antibiotics do to slow the growth of bacteria.

“We may be able to take the edge off of the extra protein synthesis,” Jennifer Darnell said.

Ultimately, there will be more to the story, Robert Darnell added. “FMRP is one of many regulatory proteins in the neuron. It doesn’t work all by itself.”

adapted from a press release issued by Rockefeller University, 11/16/2001

Scientists at last may have determined how intellectual disability develops in people with Fragile X syndrome, a condition caused by the inherited loss of an essential protein, termed the Fragile X protein FMRP. The new research demonstrates that FMRP controls the fate of several specific proteins in brain cells and thus may explain why the absence of this single protein can cause the range of physical, cognitive and behavioral abnormalities characteristic of Fragile X syndrome.

“This work represents a new understanding of intellectual disability,” says Robert B. Darnell, M.D., Ph.D., a principal investigator of the current research and a professor at The Rockefeller University. “Our findings suggest entirely new ways of thinking about treating the problems these patients have.”

Katie Clapp, president of the FRAXA Research Foundation, which largely funded Darnell’s work, and mother of two children with Fragile X says, “For the first time, scientists can explain why these children experience certain symptoms. This kind of knowledge is very reassuring to the families of children with the disorder.”

The research, reported in two papers appearing in the Nov. 16, 2001 issue of Cell, was conducted by scientists at The Rockefeller University in collaboration with researchers from the Emory University School of Medicine. One study was initiated by Darnell, head of the Laboratory of Molecular Neuro-Oncology at Rockefeller, and the other by Stephen T. Warren, Ph.D., an investigator at Emory University School of Medicine and Howard Hughes Medical Institute.

Fragile X syndrome is the second leading cause of intellectual disability after Down syndrome. Symptoms include mild to moderate cognitive and behavioral deficits as well as subtle facial malformations. In addition, the brain cells, or neurons, of people with the disease have abnormal physical features: their “dendritic spines” – the finger-like projections on the ends of neurons that are required for communication with other neurons – are unusually long and spindly.

The disease originates when genetic mutations in the FMRP gene, which lies on the X chromosome, cause FMRP not to be produced. But unlike the well-studied Down syndrome, which occurs when a portion of a chromosome is duplicated in the womb, much remains unclear about the molecular basis of Fragile X syndrome.

“The problem of Fragile X is intriguing, because the loss of a single protein causes a variety of behavioral and physical changes,” says Jennifer Darnell, Ph.D., lead author of one of the Cell reports and a research assistant professor at Rockefeller. “Before this, the consequences of losing the Fragile X protein on other brain proteins was unknown.”

Previously, it was known that FMRP, first identified a decade ago, binds to messenger RNA (mRNA) molecules – which carry genetic information (DNA) from a body cell’s nucleus to its protein-making machinery – yet the specific mRNAs involved as well as the overall purpose of this protein remained elusive.

Now, the researchers present several important clues, which together suggest that FMRP may turn up or down the production of certain brain proteins by binding to their mRNA molecules, and thus influencing the cell’s protein-making machinery. This type of protein regulation is a crucial aspect of every cell’s life, and in the case of brain cells, is essential for learning and memory formation. A key feature of the current work is the identification of the specific mRNAs that FMRP binds to, as well as the finding that these molecules are misregulated in the cells of Fragile X patients.

“We found FMRP binding sites in a population of mRNAs shown to be abnormally regulated in Fragile X patients,” says Jennifer Darnell. “The proteins coded for by these mRNAs are likely to underlie the problems these patients have.”

Darnell, a Rockefeller alumna, first became interested in FMRP about five years ago because of its similarity to another RNA-binding protein, Nova, under study in the laboratory of her husband, Robert Darnell. She identified the FMRP mRNA targets by first discovering that FMRP recognizes and tightly binds loop-like structures in RNA, called G-quartets, which represent novel human RNA-binding sites. This finding is intriguing because these structures, which resemble in appearance loose knots along a string, are typically found in DNA and not RNA; the only known case of these structures existing in RNA is in bacteriophage RNA, where, perhaps not coincidentally, they play a role in mRNA regulation. A bacteriophage is a tiny virus that only infects bacteria.

After searching a computer database of known mRNAs for the G-quartets, she hit upon a significant finding: several of the mRNAs targeted by FMRP, and their corresponding proteins, play a role in learning and memory, the development of the bones of the face and in the formation of the nervous system – all brain activities involved in Fragile X syndrome.

“Most of the mRNAs we identified as FMRP targets are involved in some aspect of synaptic biology,” says Jennifer Darnell. Synapses are the point of contact between neurons, where information is exchanged between the axon of one neuron to the dendrite of a second neuron.

“It is possible that FMRP is responsible for shuttling certain proteins out to the individual dendritic spines of neurons, and/or subsequently activating them at the appropriate time during development, as well as during adult memory formation,” says Jennifer Darnell. “This would explain how specific neuronal connections are strengthened to form memories.”

Meanwhile, Warren’s group at Emory also had independently identified mRNA targets of FMRP, only using a different technique called microarray, or “DNA chip,” analysis. The two groups, which had initially met at the 2001 annual meeting on Fragile X syndrome at Cold Spring Harbor Laboratory, collaborated and, working together, discovered that nearly 70 percent of Warren’s targets contained the G-quartets.

Finally, the researchers demonstrated that these recently characterized FMRP targets – identified in a test tube in Jennifer Darnell’s case – are in fact misregulated in patients’ cells, thereby linking their molecular findings to what’s really happening in people’s bodies.

Because FMRP seems to play a role in both the developing and the adult brain, it may eventually be possible to treat some of the symptoms of Fragile X syndrome. In addition, the discovery of several specific mRNAs involved in the disease has opened the door to new drug targets; it one day may be possible to manipulate the individual mRNAs, or proteins, responsible for the various symptoms of Fragile X as a means to treat the disease.