Drug Tolerance and Dose Range Problems May Have Been the Culprits 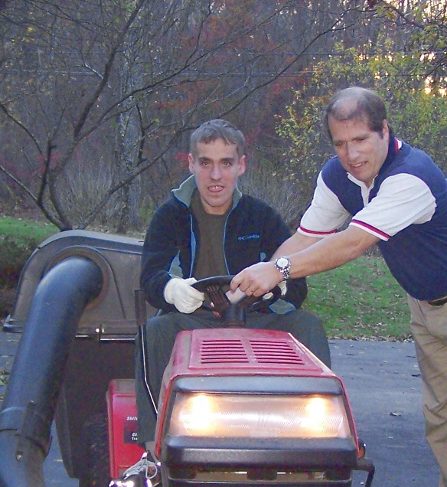 In my opinion, the Fragile X clinical trials of AFQ056 sponsored by Novartis failed because of a dose range that was inadequate for Fragile X, and because of the unexpected development of tolerance.

Dosage problems are relatively easy to correct, but tolerance to the degree we observed may be a kind of fatal flaw, at least if we’re talking about mGluR5 antagonists.  The mGluR Theory of Fragile X is still probably correct; it’s just that no one (least of all Novartis) expected tolerance to this drug — indeed, I’m not sure they would agree that’s what happened.

I think we saw a much better response than most people because our son, Andy, was also on minocycline, effectively augmenting the response, and perhaps delaying the development of tolerance.  This may be a clue to understanding the mechanism of tolerance, and how we can administer treatments for Fragile X in the most effective way.  Our son Andy just finished the AFQ056 extension trial, and we’re deep into the withdrawal now. Withdrawal symptoms go hand in hand with tolerance, so this is to be expected, but it may also explain why some people in the trials did worse than placebo.  A minor form of withdrawal is interdose rebound, and I suspect this was an issue for many people in the trials.

The mGluR Theory and Lithium

So, the mGluR Theory is still compelling, but we need to find another way to tone down the excessive mGluR signalling seen in Fragile X.  We also need to anticipate potential tolerance and to avoid drugs susceptible to tolerance.  Incidentally, baclofen is well known to cause tolerance, so this may have been a problem in the arbaclofen trials, too.

Lithium modulates the activity of G-protein coupled receptor (GPCR, which includes mGluR) signalling, and has been extremely well validated in Fragile X animal models.  It has also been shown effective in preliminary clinical trials in Fragile X subjects.  Most importantly, given recent developments, lithium treatment does not result in any form of tolerance, at least not in the usual psychiatric indications.  This is reassuring, and the use of this medication over the course of several decades in millions of patients, demonstrates that it is an effective therapeutic (whereas mGluR5 antagonist trials have failed in every case, for a number of different indications).

There are 2 other possible explanations for the negative results from the Novartis trials. The one most often cited by virtually everyone in the field is the poor quality of the outcome measures available for Fragile X clinical trials. These outcome measures, like the Aberrant Behavior Checklist and the Clinical Global Impression scales, are certainly crude instruments. There is little doubt that the “resolution” of these measurements is poor, and there is quite a bit of room for improvement in outcome measures for Fragile X clinical trials. However, these trials simply did not show any hint of positive effect from the study drug (AFQ056).  Extensive analysis after the study ended (“post hoc analysis”) showed absolutely no benefit from the drug compared to placebo.

There was one interesting result, though. Whereas many of the non-specific outcome measures (like CGI, VABS, and post-hoc narrative assessments from the clinicians) were essentially the same in placebo and all the drug dosage groups, the ABC scores got worse with higher drug dosage, and this effect was statistically significant when the two trials (adult and adolescent) were combined. Now, this isn’t a good result for the development of AFQ056, but it is interesting if we assume that the drug itself had no discernible effect (in other words, the result was a true negative.) We would expect that the drug group would have some side effects, that side effects would be greater at higher doses, and that in a special needs population side effects will usually express themselves as behavioral problems. So, if the drug doesn’t work, you would expect the high dose drug groups would actually get a bit worse, and the ABC scores showed exactly that.

Hmmm… maybe the ABC isn’t quite as useless as everyone seems to think!

In any case, the outcome measures didn’t doom this trial—the drug, as administered, simply didn’t work (in most subjects). The post hoc analysis didn’t show even the tiniest suggestion of efficacy, and post hoc analyses always show something (this is another whole subject all by itself; using post hoc analyses can be an enormous tail-chasing exercise, with a host of new problems.) So, even when every detail could be examined outside the official trial protocol, a method virtually guaranteed to turn up something (at least a false positive!) turned up nothing at all. This gives us (well, me anyway!) great confidence that the drug didn’t work the way it was given. I doubt that the best outcome measures imaginable would have altered the results.

Of course, we also need to re-visit the dosage issue. Most subjects in the trials were on doses that would be definitely sub-therapeutic.  Since dosing was fixed, and subjects were randomly assigned to dose groups, some people in the high dose group may have been on more than they needed. This isn’t how psychopharmacology works in the real world; in clinical practice, we adjust the dose for optimal effects in each individual. However, in a clinical trial, this causes statistical headaches, so fixed dose groups are used.

So, the quest for improved outcome measures will continue.

The other possible explanation for the negative result (other than the obvious true negative condition) is that the effect is real but relatively subtle, possibly very gradual in onset, and not easily measured. In other words, it is below the level of resolution of any available outcome measure. But it is possible that AFQ056 monotherapy could have relatively little effect, while a rational drug combination could be quite effective. I have previously mentioned that we observed an excellent response to the study drug (though with significant subsequent development of tolerance.)

“All drugs push the system one way or another, but the system is designed to push back”

Indeed, now that our son has discontinued the AFQ056, we know that the tolerance was only partial, because he is clearly not doing well off the drug—probably some withdrawal symptoms mixed in with return of original Fragile X behavioral symptoms. We are convinced that the drug has beneficial effects in our son, but our son is also on other drugs, most notably minocycline. It seems quite possible that this makes a big difference, and that a combination of disease-modifying drugs may be needed to yield a therapeutic effect which is big enough to measure in this difficult environment.

This is not unprecedented in medicine.  For example, some antihypertensive drugs have relatively minor effects on blood pressure when given as monotherapy (and some show significant long-term tolerance), but are useful in combinations. All drugs push the system one way or another, but the system is designed to push back; more than one drug makes it harder for the system to compensate.

So, in the future, we’ll be thinking about testing drug combinations in clinical trials. A more potent drug effect will also make it easier to validate new outcome measures, so this meshes well with the needs outlined above, and an integrated strategy is starting to take form!

Drug Cocktails: Our Personal Experience in the Clinical Trial of AFQ056

Our personal experience included seeing a lot of positives in our son along the way. Could it be that there was something about our case that made a response more likely?

Our son had been taking minocycline for years. I think that the combination of minocycline and AFQ056 was probably much more effective than just AFQ056 alone. The preclinical evidence for minocycline as a disease-modifying agent in Fragile X is very strong, and the clinical trials done to date, though probably not rigorous enough to be considered definitive proof of efficacy, have been positive (unlike some others!)

It stands to reason that a combination of two drugs would work better, given that Fragile X is a disorder that affects the brain globally. In other words, one drug might work well in one area of the brain, but not fix everything; another drug might work well in other areas or other pathways, so that the combination gives greater “coverage” and a better clinical response, especially with the rather crude outcome measures used in current clinical trials. It would be interesting to see if trial subjects on minocycline had any better pattern of response, but I doubt there were enough subjects on the combination to analyze properly (especially since many of the subjects were outside the US, where minocycline use in Fragile X is much less common.

One question I’ve been asked a few times is, if there is tolerance developing to mGluR5 antagonists, why don’t the rating scales from the trials show that? Why don’t we see the scores go down, then back up? Of course, all of the above has an effect — most patients aren’t getting enough drug effect to notice in the first place. But this is also where the shortcomings of the outcome measures may come into play. The resolution of these rating scales, especially in the context of moderately large placebo responses, is simply nowhere near good enough to quantify tolerance (although, I should note that our scores did go way down, then back up a bit toward the end of the study; I believe our son’s clinician ratings also showed this.)

It’s also possible that there are sub-groups of Fragile X subjects who are particularly responsive to one drug or another. We have friends who participated in both the arbaclofen trial and one of the mGluR5 trials, and some of them have had terrible experiences with one, but great effects from the other. Ideally, you’d like to be able to predict who would do better, either with a biomarker or via phenotypic features, but there’s nothing available right now to do that.

Perhaps one solution is to run pilot trials with combination treatments as a way of getting more robust and reliable effects from the drugs. This would allow for better study of outcome measures and biomarkers, and it would allow us to figure out which ones are actually drug-responsive. It may be unrealistic to expect that any one drug can move the needle far enough to be measurable, but a two drug combo may have a better chance of success.